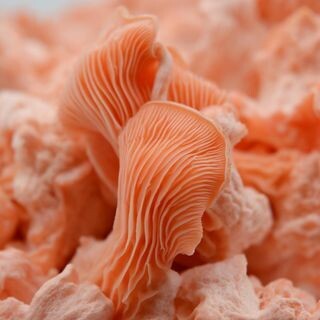 Blue Oyster mushrooms, also known by their Latin name "Pleurotus Ostreatus Columinus" are a common culinary mushroom that usually grow in large "shelf-like" clusters. Pleurotus mushrooms are among the fastest fruiting mushrooms known to man, and when conditions are right clusters can double in size within a day! These mushrooms also have uses beyond the kitchen, and are commonly used for industrial-scale mycoremediation purposes.

The Oyster mushroom is widespread in many temperate and subtropical forests throughout the world, and is a saprotroph that acts as a primary decomposer of wood, especially deciduous trees, beech in particular. Therefore, when growing Oyster mushrooms indoors one must use a hardwood-amended substrate. Oysters, along with Lions Mane, are some of the easiest mushrooms species to grow, so are both a great choice for a beginner grower!

Oyster mushrooms are regarded as a delicacy in Japanese, Korean, and Chinese cuisine. This mushroom species is frequently served on its own, in soups, stuffed, or in stir-fry recipes. The mushroom's taste has been described as mild with a slight odor similar to anise. Oyster's are best when picked young; as the mushroom ages the flesh becomes tough and the flavor becomes acrid and unpleasant.

The size and shape of Oyster mushroom fruiting bodies can vary immensely, depending on the growing conditions, but typically display a broad fan or oyster-shaped cap spanning 2–30 cm in diameter. Blue Oyster mushrooms require higher levels of fresh air exchange in order to grow properly than almost other mushroom commonly cultivated.